4th Sunday of Lent: Climacus and his Ladder 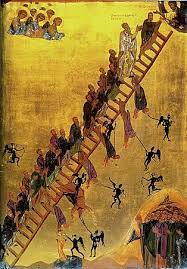 As ever-blooming fruits, you offer the teachings of your God-given book, O wise John, most blessed, while sweetening the hearts of all them that heed it with vigilance; for it is a ladder from the earth unto Heaven that confers glory on the souls that ascend it and honor you faithfully. (Kontakion)

Here are the resources for the Sunday of St John Climacus (or, known as “of the Ladder”), the 4th Sunday of Lent. In particular, we ought to listen to the resurrection hymn and the gospel reflection by Father Hezekias and Sebastian.

Do yourself a favor, spend time with the Word of the Lord in preparation for Sunday Liturgy.

A 7th century monk of Mount Sinai of Egypt. He is the author of a famous text of spiritual discipline. He spent 40 years as a hermit and later abbot. He is famous for his book, The Ladder of Divine Ascent, which was written with the presumption of a monastic context. That is, the contents speaks of how to raise the soul to God by the acquiring virtues and rejecting specific sins. The ascent is of the soul is described in 30 steps (think of the image of a ladder with 30 steps) and the number 30 corresponds with the age that Jesus began his public ministry. A widely read book in Byzantine spirituality.

Why are we celebrating a famous monk and his book when we are not monks? The activity that St John Climacus speaks about, just like the gospel passage read today, that of the Lord’s Transfiguration, is what we followers of Jesus desire, too. That is, we desire to be personally transfigured from someone not too acceptable, into someone beautiful and desirable. Just as Moses who saw God on the mountain and came back to his followers to convey what he is seen. The connection with the gospel of the Transfiguration and St John Climacus comes in the line, “Lord, I believe but help my unbelief.” Prayer and asking for help. Faith is strengthened in prayer and fasting.

We ought to read daily a spiritual book, first starting with a passage of Scripture and then a good spiritual book. Place yourself in the presence of the Lord, so that you can cast out demons. Have faith!