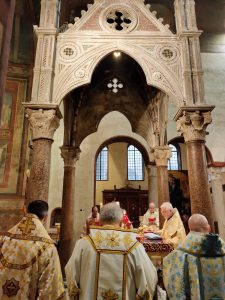 The heart of the community is the celebration of the Holy Eucharist. The message preached and shared –meaning, concretely, really, truthfully lived– is the Gospel of Jesus Christ. The Melkite Church maintains an historic continuity with the One, Holy, Catholic and Apostolic Church; she lives and preserves the faith and practices of the Faith as defined by the first seven Ecumenical Church Councils as well as the decisions from local Church councils that occurred through the years. We call ourselves Catholic because the faith is all over the world, taught by the bishops who are in communion with the Bishop of Rome. The word “Orthodox” is applied to our faith because it reveals the reality of being both “right believing” and “right worshipping”: it is the encounter with beauty of the Holy Trinity. We believe and experience the Melkite Catholic Church as the bearer of an uninterrupted Christian tradition expressed by true faith lived out in worship of God because the Melkite Church is a sure and certain path to Jesus Christ. 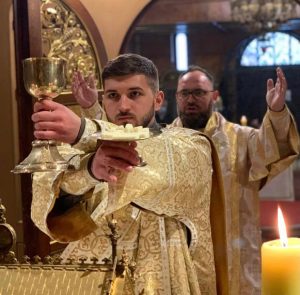 As the Gospels and the writings of the Apostle Paul taught, the Last Supper, that is, the “night when He [Jesus] was betrayed” (I Cor. 11 :23), He instituted the Holy Eucharist, the sacrifice of the New Testament. The Lord wanted to perpetuate His sacrifice on the cross a “memorial” of His life, death and resurrection” until He comes again (I Cor. 11 :25-26). This memorial is known variously as the Breaking of the Bread, the Offering, or the Eucharist.  As St. Augustine of Hippo said, the Holy Eucharist becomes a “mystery of piety, a sign of unity, and a bond of charity” (PL, 35, 1613). We know historically, the word “Eucharist” — eucharistia— meaning thanksgiving, in Greek. By the early years of the first century St. Ignatius of Antioch (d. AD 107) taught that what is done at the Liturgy, the Holy Eucharist, is what is commonly known by the faithful. He said, “Make an effort to meet more frequently to celebrate God’s Eucharist and thus offer to Him praise” (cf. Letter to the Ephesians, ch.13). 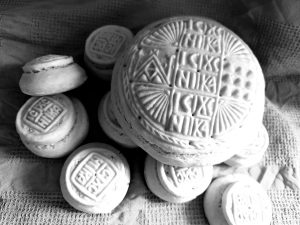 The common  Greek word “liturgy” means any public function in the interest (i.e., something done on behalf) of the people. When applied by the community of faith the witness comes from The Septuagint –the ancient Greek Bible–  the word “liturgy” means a sacrifice as a religious public service given to us through the Lord’s “priestly function” (Hebrews 8:6). It is THE privileged point of encounter with the Triune God (Father, Son, and Holy Spirit). What the bishop or the priest does is to pray the Liturgy on behalf of the people who are entrusted to his care. So, each Sunday the priest is enjoined to pray (to offer, to serve) the Liturgy for the people of the parish. The public ministry of the priest, hence, is the offering to God the Eucharistic sacrifice of the Body and Blood of our Lord Jesus Christ (cf. Letter of St. Clement of Rome, c. AD 96) for the forgiveness of sins and the recalling of what the Lord did with the Apostles in the Upper Room. 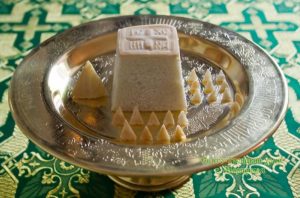 The regular, communal prayer of the Melkite Church is on Sunday and it is a holy day. Why? We closely follow (that is, adhere to) the Third Commandment given to the Prophet Moses by God: keep holy the Lord’s Day. Plus, we do what our Savior did: worship God the Father. The authentic Christian tradition is to gather on the Day of the Resurrection (i.e., Sunday) to worship the Holy Trinity. For most of the year, hence, the Church prays the Liturgy of St. John Chrysostom.

For several weeks of the year, however, the Church prays the Liturgy of St. Basil the Great, bishop of Caesarea. Basil was the bishop there from AD 370 – 379. The prayers of the Liturgy of St. Basil are much longer than those of Chrysostom’s Liturgy which has a rich patrimony of theology and spirituality that will inform and form our spiritual life.  St. Basil’s Liturgy is prayed ten times a year:

On one or two days of the year, the Liturgy of St. James is prayed, typically on his feast day (October 23rd) and perhaps on the Sunday after the Nativity. It is derived from the Liturgy of the Church in Jerusalem. Generally speaking you will hear this Liturgy prayed by the Melkites and rarely among Slavs, due to the historical links between the Melkites and the Church in Jerusalem. In Eusebius’ Church History the James referenced was James, son of Zebedee, the brother of the Lord, and elected named the bishop of Jerusalem by the apostles.

Here are the Sundays. Holy Days, and important saints of the Byzantine Church year as given in the Melkite Church liturgical calendar: