His Beatitude is a member of the Missionary Society of St. Paul. He was ordained priest on 6 May 1973 and bishop on 22 June 2001. Among his past ministries His Beatitude was elected by his brothers to be the Superior General of his congregation. As bishop he served as the Patriarchal Vicar in the Archdiocese of Damascus from 2007 to 2017. As the Melkite Patriarch he is in communion with Pope Francis and the Father of our Church.

Here is a brief article by John Burger on Patriarch Joseph for Aleteia. 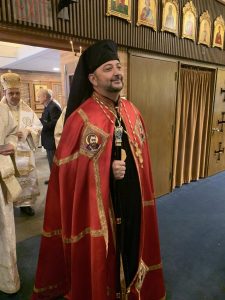 On August 20, 2022, the feast of the Holy Prophet Samuel (Byzantine liturgical calendar) His Holiness, Pope Francis accepted the resignation of Bishop Nicholas and consent to the canonical election by the Melkite Synod of Bishops of Father François Elias Beyrouti, PhD, 51, pastor of Holy Cross Melkite Church (Placentia, CA) as the sixth bishop of the Eparchy. He was ordained priest 24 years ago on October 4, 1998 for the Melkite eparchy in Canada; he incardinated in the Newton Eparchy 11 years ago.

The conferral of episcopal character was on 12 October 2022 in Los Angeles, CA, by Patriarch Joseph, Bishop Nicholas and Archbishop Borys Gudziak.

The enthronement of Bishop François took place at the Annunciation Melkite Cathedral on 19 October 2022 in West Roxbury, MA.

Our prayers and friendship stand with our new bishop and we support his ministry among us!

More on the new eparch may be read here. Father Dennis McCarthy was raised in Oxnard, California. His journey toward priesthood has been colorful. He has served in the United States Marine Corps, attended law school and married Lisa Brown.

Father Damon Geiger, then the pastor of this parish approached him to see if I would be interested in becoming a deacon. After much prayer and discussion with my wife, I decided to enroll in the formation program and ordained in 2003, and since have served St Ann’s and Our Lady of Perpetual Help Church in Worcester, MA. 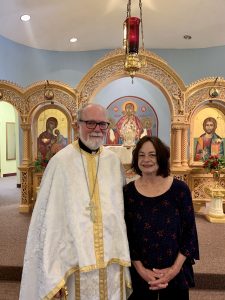 In 2011, Father Damon acting as the agent of the Holy Spirit asked Deacon Dennis if he had ever considered becoming a priest. Indeed he had considered priestly ministry but thought it remote. As we know, the question of a priesthood in the Eastern Churches in the Western world, however, was changing. Deacon Dennis just completed a Masters in Theology, he initiated discernment asking the question: is God was leading me to serve Him as His priest. Bishop Nicholas and Archimandrite Philip Raczka encouraged him to take more courses at Boston College School of Theology, he completed an advanced certificate in pastoral ministry and was ordained priest on 10 June 2017. Bishop Nicholas James Samra was the fifth eparchial bishop of the Eparchy of Newton having been elected in 2011. He retired from episcopal ministry and administration of the Eparchy on 19 October 2022 when Bishop François was enthroned.