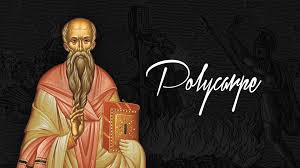 According to the witness of St Irenaeus, Polycarp was a companion of St John the Theologian. After John’s exile to Patmos, Polycarp was ordained to the clergy of Smyrna, now the town of Izmir in Turkey. While still a young man, he became bishop of that city, and in this capacity, he welcomed Ignatius of Antioch as the latter was journeying to his martyrdom in Rome. One of Ignatius’ letters is addressed to Polycarp. The encouragement Polycarp received in this letter no doubt helped him face his own death.

He is remembered as an orthodox teacher, and one who maintained the traditions of the apostolic doctrine.

A vivid account of his martyrdom was written, shortly after it occurred in 155. It quotes the consul’s demands that Polycarp curse Christ and worship the emperor. Polycarp responded: “How can I blaspheme my saviour … I have served him for 86 years, and he has done me no wrong.” He was sentenced to burn at the stake. He is described as resembling “gold or silver, being refined in a furnace.” This early document, no doubt, is responsible for the feast of Polycarp appearing as the first annual commemoration of a martyr on the Church calendar. (NS)