Entrance of the Theotokos into the Temple 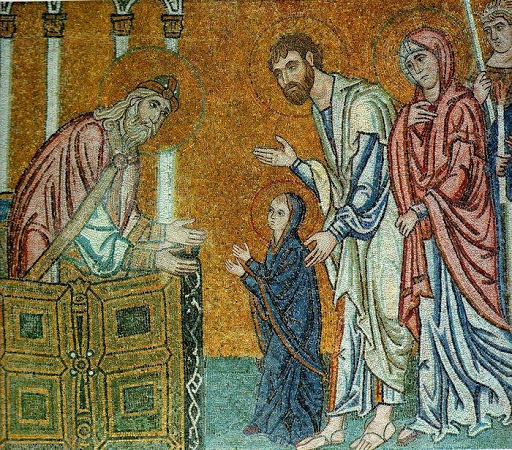 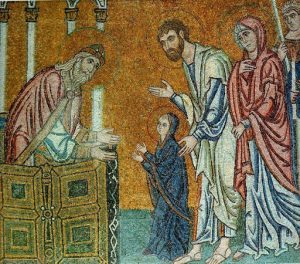 “And when the child was three years old, Joachim said: ‘Let us call the undefiled daughters of the Hebrews, and let each one take a lamp, and let these be burning, in order that the child may not turn back and her heart be enticed away from the temple of the Lord.’ And he did so until they went up to the temple of the Lord. And the priest took her and kissed her and blessed her, saying, ‘The Lord has magnified your name among all generations; because of you the Lord at the end of the days will manifest his redemption to the children of Israel.” (Protoevangelium of James 7:2)

Today’s feast is found in an apocryphal gospel, written after the year 150. Because this gospel was not accepted as canonical, it is not quoted in the liturgical texts of today’s feast, which is, nonetheless, based on the description of this event. It may be thought of, therefore, as a theological feast, a feast of how Christians thought of Mary. The meaning is clear: the Temple of the Jewish Law was the dwelling place of God.

This foreshadowing was fulfilled in Mary, who became the true, physical dwelling-place of God in her womb in the new covenant of Christ: “the Theotokos is the temple of God, and with a virgin’s glory, she is being led as a young child into the Temple. (Sticheron, Psalm 140, Nov. 20)” But there is more, in the Temple Mary was fed on food from an angel: “O Virgin, you were faithfully nourished by heavenly bread in the Temple of the Lord. (Sticheron, Psalm 140, Nov. 20)” Thus, the Temple built with stones becomes the living Temple, the Mother of God, which becomes the Temple of the Church, and just as Mary received the angelic bread, so we receive in the Christian temple the bread of life, the Body of Christ, making us all into the Temple of the Lord. (1 Corinthians 6:19)

No wonder that St. John Damascene compared the Eucharist to the Annunciation of Mary. It also sets us up for Christmas, where Bethlehem (Hebrews, “House of Bread”) becomes the place in which God becomes present to us as a human being from the womb of Mary, God’s temple, eventually to give us this same body as our food in the Eucharist.

Much to celebrate today!