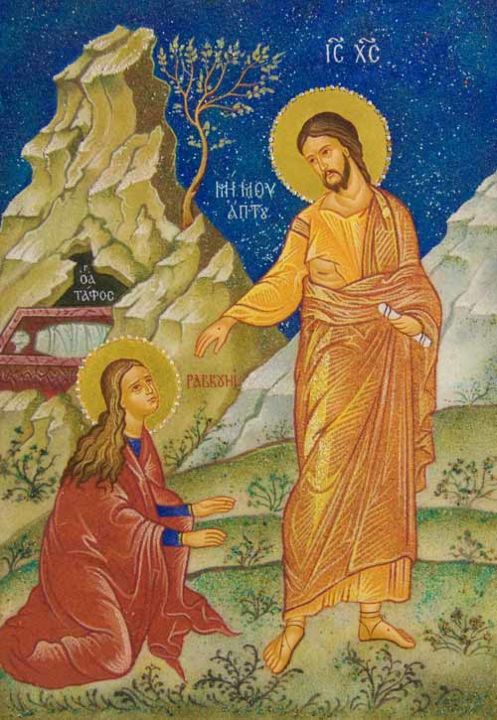 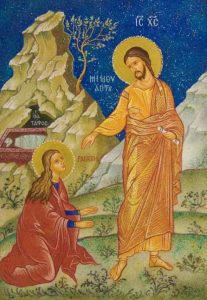 The holy myrrhbearer and equal of the apostles, Mary Magdalene is commemorated today.

There are several Marys mentioned in the New Testament. The surname Magdalene distinguishes this Mary as the one from the town of Magdala. Luke’s gospel mentions that Jesus relieved her of seven devils, which could have simply been some kind of physical or mental illness. Scripture gives evidence of her life as a devoted follower of Christ whose loyalty remained firm when even the faith of the other twelve apostles wavered.

It is most likely that the unnamed woman who washed Christ’s feet with her tears, dried them with her hair, and then anointed them was Mary Magdalene, as depicted in many icons of her.

The Church gives Mary Magdalene special honor as the most faithful companion of Jesus as she was at the foot of the cross when he was crucified, and was the first to witness his resurrection. Her encounter with Christ on her way to perform the funeral anointing, as recorded by John, earned her an apostles’ task, for it was she who was commissioned to tell the other apostles that Christ had risen. Thus it becomes clear that not only was she “equal to the apostles” but as scripture shows, she was “apostle to the apostles.” (NS)

“O Mary Magdalene, you were the first to witness the divine Resurrection of the First Cause of all good things, who has compassionately deified our nature; and you were the first to be the herald of the good news to the Apostles, crying out to them: Lay aside your sadness! Receive great hope instead! Come and see the risen Christ who grants the world great mercy! (Doxasticheron, Tone 6, at Psalm 140)