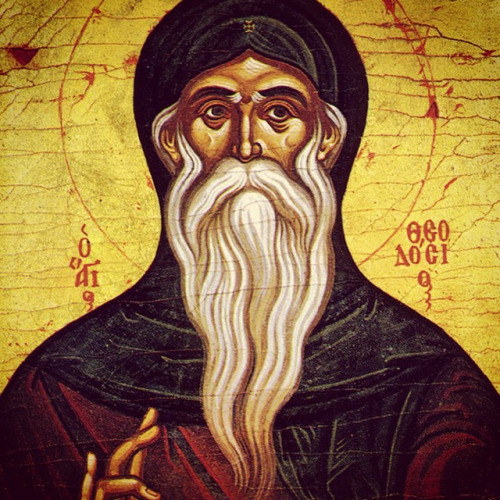 Today we liturgically recall the venerable father, Theodosius, called a leader of the common life. He was born in 423. It is also the sixth day of the Theophany feast.

At the end of the 5th century, this father founded a cenobium near Bethlehem. By his day many had come from as far away as Georgia and Armenia to enter monastic life in Palestine. He accommodated his multi ethnic community by having the Liturgy of the Word served in separate chapels in Syriac, Armenian and Georgian, then all the monks came together for the Eucharistic Liturgy in Greek in the main church. His monastery was large enough to staff a hospice for the elderly, and for the poor and sick as well as one for the mentally ill.

His organizational skills were recognized in Jerusalem, where the Patriarch made him cenobiarch, i.e., the leader of all the monasteries of the common life under his protection.

Theodosius along with Sabbas upheld the decisions of the Council of Chalcedon in the midst of the strife this council engendered, even in the monastic settlements.

He died in 529 at the age of 105. His monastery was sacked twice in the 9th century, and was completely destroyed in the 15th. (NS)

More of the biography of St Theodosius can be read here.