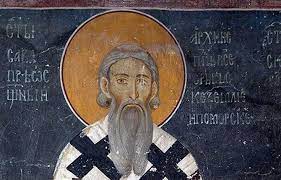 Today our Church recalls one the important saints, Our Venerabe Father Savva (Saba) the Sanctified.

St Savva first entered a monastery near his home in Cappadocia, but in the year 457 he travelled to Jerusalem and sought out St Euthymius. After spending some time under his instruction, Savva spent several years in seclusion in the Kedron wilderness. He was soon surrounded by followers. He organized them into a semi-eremitical community known as a lavra, which consisted of caves in a wild gorge in the wilderness between Jerusalem and the Dead Sea. The reputation he gained for wisdom and holiness earned him an unsought role in ecclesiastical history. The patriarch of Jerusalem ordained Savva priest and made him his vicar, or archimandrite, over all the eremitical settlements in Palestine.

St Savva, together with St Euthymius, was responsible for keeping the vast number of monks in Jerusalem and the rest of Palestine loyal to the decrees of the Council of Chalcedon concerning the two natures of Christ.

Savva was 93 when he died on this date in 532. The Typicon of St Savva, while probably not his actual composition, had enormous influence on the shape of worship in orthodox churches, especially for our Church of Antioch (the Melkites)

In 1256 the Crusaders removed the body of St Savva to Venice, where it was enshrined until 1965 when Pope Paul VI returned it to the lavra that is today known as Mar Savva. This lavra has a history of nearly fifteen hundred years, which makes it one of the oldest inhabited monasteries in the Christian world today. (NS)