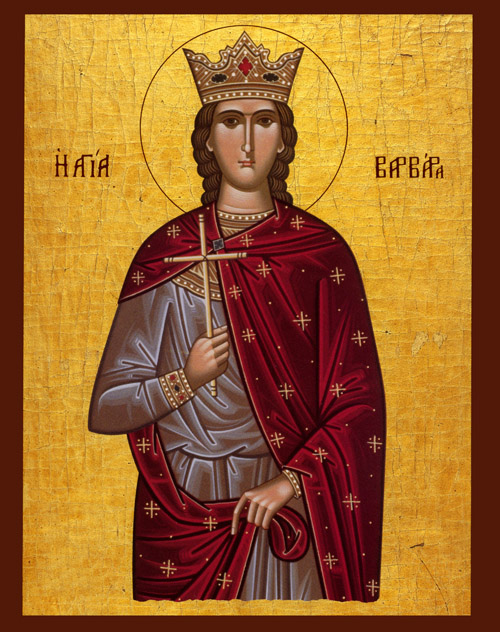 St Barbara is commemorated today in the Church’s prayer of the Divine Liturgy and the Hours.

There is little doubt that the legendary story of the Holy Martyr Barbara was embellished a bit by early hagiographers. There is no reason for this, since the mere fact that someone who comes to faith in Christ is willing to lay down their life for him. For this reason, the more plausible facts of her life are a beacon for us who struggle in and for the faith. Her story tells us that she was a philosopher, a “lover of wisdom.” It was her love of wisdom, guided by grace that brought her to faith in the one true God in the Holy Trinity.

It is a reminder that our faith is not blind, it is rational, based on an authentic consideration of reality. Clement of Alexandria was one of the first Christians to see the value of Greek philosophy for the Christian faith, and on this same day, December 4, we celebrate the memory of Our Holy Father John Damascene, who wrote a massive work, the Fount of Wisdom, reasoning about our faith.

St. Barbara, however, shows that once we believe in the true God, it becomes more than just an intellectual exercise, but it changes and transforms our whole life, so that we cannot live any other way, and so she gave up her life for her faith. The story also tells us that it was her very own father who executed her. This is plausible. We know, as Christ told us, “From now on a household of five will be divided, three against two and two against three; a father will be divided against his son and a son against his father, a mother against her daughter and a daughter against her mother, a mother-in-law against her daughter-in-law and a daughter-in-law against her mother-in-law” (Luke12:52-53).

What does family truly mean in our faith? What does it mean to be a father? Should not a father encourage his daughter to become her own person, and not simply to imitate his way of life? A beautiful idea, but how do we carry it out in practice? What if the roles had been revered and the father was a Christian and his daughter would want to revert to paganism? Would he then be justified in his actions? I think some of us might say yes. We have difficulty, I think, separating sin and sinner. We say, “Hate the sin, but love the sinner,” but we have difficulty distinguishing the two, and we end up hating the sinner double. The father would not be justified in killing his daughter, even if she was wrong, and even less, of course, because she was right.

Our Lord taught, “But I say to you, love your enemies, and pray for those who persecute you, that you may be children of your heavenly Father, for he makes his sun rise on the bad and the good, and causes rain to fall on the just and the unjust” (Matthew 5:44-45). Therefore, we pray today to St. Barbara, in whom the light of Christ shone forth, to lead us to a rational faith and a love for all people created by God.