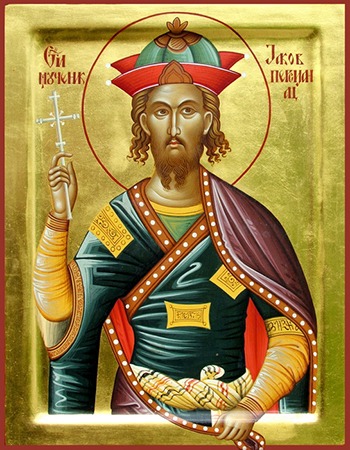 As you know, the beauty of the Church is the diverse group of disciples of the Lord who have been called through the years. The Church is the place where one follows Jesus Christ. One particular martyr-saint who commemorated today for the 25th Sunday after Pentecost is Saint James the Persian. His brief biography was given by Father Dennis prior to the Liturgy today. By faith and experience, it is Christ who “moves” the person to follow His example of self-sacrifice, of self-gift, being “moved by the desire for man’s destiny,” as demonstrated by Saint James the Persian.

The holy martyr James the Persian. A noble at the Persian court, James offered sacrifice to idols despite his baptism. His mother and wife reproached him, begging him to repent. Moved by this, he repented bitterly and returned to Christ. The king sentenced him to death by being cut to death, bit by bit, until the end. He praised God and forgave his persecutors till they cut off his head. His holy head was taken to Rome, and a part of his relics are venerated in Portugal, where his feast is kept on May 22. (400)

Let us ask for the grace to return to the Lord.
Saint James the Persian, pray for us.