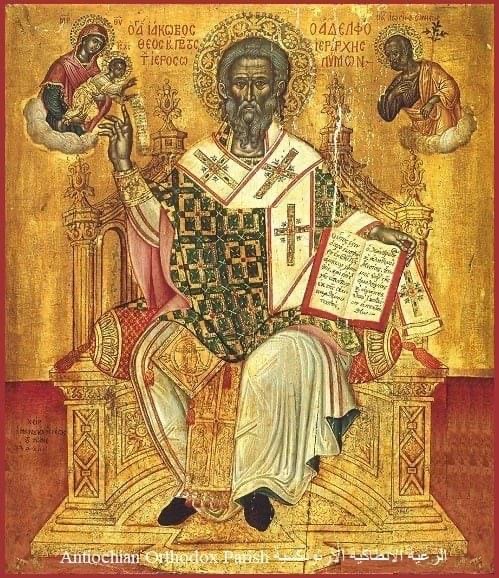 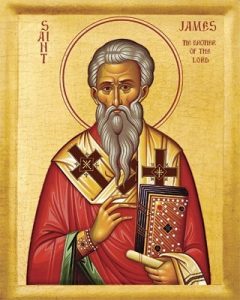 Today (October 23), we celebrate the memory of the Holy Apostle James, the Brother of God (Greek) or the Brother of the Lord (Slavonic). The Western tradition often identifies him with James, the Son of Alphaeus, but the Eastern Church considers him a different person. He was the “brother of Jesus,” (Matthew 13:55).

In light of the perpetual virginity of Mary, this is usually interpreted as a son of Joseph by a previous marriage, who was therefore raised with Jesus in one household. The relatives of Jesus did not seem to be that enthusiastic about his mission (John 7:3-5, “his brothers did not believe in him”), but after his resurrection, James became the leader of the Church at Jerusalem. St. Paul wrote, in today’s Epistle, “after three years I went up to Jerusalem to confer with Cephas and remained with him for fifteen days. But I did not see any other of the apostles, only James the brother of the Lord. (Galatians 1:18-19)”

According to tradition, he was martyred by being thrown from the height of the Temple and then beaten to death with clubs (or stones?). He is credited with writing the so-called Protoevangelion of James, which describes in detail the infancy of Jesus, but which could hardly have been written by him, since it could not have been written before the year 150. From this Gospel we have many of the Churches feasts: the conception of Mary in the womb of Anna, the entrance of Mary into the Temple and many of the details of the birth of Jesus, as, for example, the midwife Salome. The Epistle under the name of James is also assigned to him, though scholars are generally skeptical of this attribution.

His Epistle is very important for the teachings of faith:

“All good giving and every perfect gift is from above, coming down from the Father of lights, with whom there is no alteration or shadow caused by change. (James 1:17, quoted in our Ambon Prayer)”

“Religion that is pure and undefiled before God and the Father is this: to care for orphans and widows in their affliction and to keep oneself unstained by the world. (James 1:27)”

“Listen, my beloved brothers. Did not God choose those who are poor in the world to be rich in faith and heirs of the kingdom that he promised to those who love him? But you dishonored the poor person. Are not the rich oppressing you? And do they themselves not haul you off to court? Is it not they who blaspheme the noble name that was invoked over you? (James 2:5-7; see also James 5:1-6)”

“What good is it, my brothers, if someone says he has faith but does not have works? Can that faith save him? If a brother or sister has nothing to wear and has no food for the day, and one of you says to them, “Go in peace, keep warm, and eat well,” but you do not give them the necessities of the body, what good is it? So also faith of itself, if it does not have works, is dead. (James 2:14-17″ (Probably because this passage, Luther deemed James to be “an epistle of straw,” but he was not successful in getting it removed from the Protestant Canon)

“In the same way the tongue is a small member and yet has great pretensions. Consider how small a fire can set a huge forest ablaze. The tongue is also a fire. It exists among our members as a world of malice, defiling the whole body and setting the entire course of our lives on fire, itself set on fire by Gehenna. (James 3:5-7)”

“Come now, you who say, “Today or tomorrow we shall go into such and such a town, spend a year there doing business, and make a profit” – you have no idea what your life will be like tomorrow. You are a puff of smoke that appears briefly and then disappears. Instead you should say, “If the Lord wills it, we shall live to do this or that. (James 4:13-15)”

“Is anyone among you sick? He should summon the presbyters of the church, and they should pray over him and anoint him with oil in the name of the Lord, and the prayer of faith will save the sick person, and the Lord will raise him up. If he has committed any sins, he will be forgiven. (James 5:14-15, theologically considered the scriptural foundation of the sacramental mystery of Holy Anointing)”