Our venerable father, Simeon, the stylite 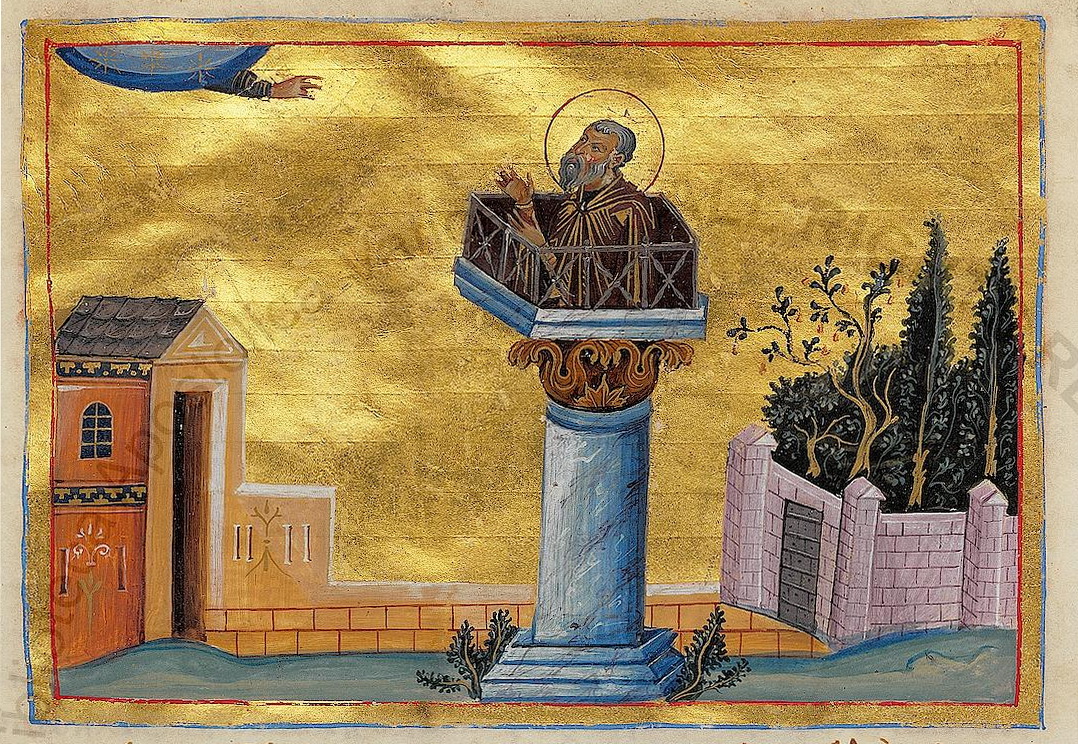 Today, the Church liturgically recalls a significant monastic father, Simeon, who lived on a pillar. You will recall there is an icon of Saint Simeon on the wall in the nave of the parish on the left side (it’s not the image for this post, however).

“Simeon was born at the end of the fourth century in Cilicia. His youth was spent in the rigors of asceticism for which the Syrians were well known. After twenty years of wandering from one monastery to another, he settled in 423 in what came to be called the Deir Sim’an.

Just as desert monks have always sought to escape the crowds that flocked to them, Simeon chose to escape vertically. His perch began as a low pillar — stylos in Greek — which was eventually raised to about sixty feet, featuring a twelve foot square platform at the top, surrounded by a balustrade.

Here, safe from the press of the crowd, he was nonetheless surrounded by all sorts of people seeking advice, from pilgrim and sightseer to emperor and bishop. He showered all with that unique wisdom born of monastic experience. In his instructions, and in the answers he gave his petitioners, he displayed spiritual insight and common sense. Despite his eccentric abode, he was free of the fanaticism that often marred the monasticism of the era. Many Bedouin Arabs were converted to Christianity under his guidance. Simeon was the talk of the whole Byzantine empire, and visitors flocked from Persia, Armenia, and Georgia to hear him speak. He died in 459.

At the end of the fifth century an enormous monastic center was erected at the site of Simeon’s pillar. It included three monasteries and a large guest lodge. A cross-shaped martyrium was erected, financed by the emperor Zeno. It was the largest church building in Syria. Today, even its ruins are impressive, pointing to a time when the monastic ideal held sway against the luxury and self-indulgence of the times. (NS)