Heroic virtue of the Servant of God Jérôme Lejeune 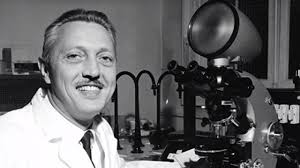 This morning Pope Francis recognized heroic virtue of the Servant of God Jérôme Lejeune, born on 13 June 1926 at Montrouge (Francia) and died in Paris (France) on 3 April 1994.

This advancement in the cause in the canonization process carries the title for Lejeune, Venerable Servant of God. Now we wait for the certification of a miracle to be beatified. God willing this will be coming soon.

By God’s grace we have in the life and heroism of Doctor Lejeune a terrific example for all Catholics, indeed all people of good will, today. As one person said Lejeune is an “outstanding symbol for the defense of God’s rights in science and legislation.”

A brief biography of the Venerable Servant of God Jérôme Lejeune:

Dr. Jerôme Lejeune was both a brilliant scientist and a dedicated Catholic. His groundbreaking work on the genetic causes of syndromic intellectual disabilities won him international acclaim from academics and world leaders alike: not only did he establish conclusively that Down syndrome is caused by an anomaly in the 21st chromosome, but he also discovered the causes of cri-du-chat and Fragile X. Tragically, Dr. Lejeune’s research was used to develop prenatal screening techniques to detect these syndromes in unborn children, effectively promoting their abortion.

Always a devout Catholic, this turn of events led Dr. Lejeune to become an outspoken defender of unborn infants and children with Down syndrome and other genetic conditions. In 1969, he was presented with the William Allan Award, the highest prize in the field of genetics, by the American Society of Human Genetics. He took the opportunity to denounce abortion publicly before his fellow scientists. That day, as he later told his wife, “I lost my Nobel Prize for Medicine.”

He established in Paris the world’s first clinic dedicated solely to the care of infants and children with Down syndrome. In 1981 he addressed a US Senate subcommittee on the overwhelming scientific evidence showing that human life begins at conception. In 1992, once again in the U.S., he testified in the Davis v. Davis “frozen embryo case” that human embryos are indeed human beings and not commodities.

Both the academic world and the press retaliated. His career ground to a halt; his funding was discontinued; and his former colleagues shunned him. He was appointed head of the Pontifical Academy for Life by John Paul II in 1994, but suffering as he was from cancer, he did not hold the post for more than a few weeks. He died on Easter Sunday of the same year. His medical legacy is carried on by the Fondation Jerome Lejeune, which finances and carries out research on genetic intellectual disabilities, supports patients and their families, and remains staunchly pro-life.