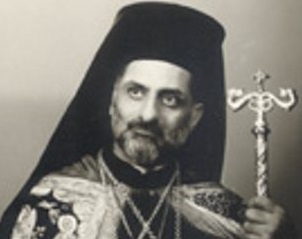 On MLK Day we have an opportunity to appreciate the excellent work of one of OURS, Archbishop Joseph Raya.

“Settling in the United States of America, Father Joseph Raya mostly served as a priest in Birmingham, Alabama. His sixteen years in Birmingham were characterized by a number of ambitious, but successful undertakings: he promoted vernacular (English) in Byzantine Church services, he engaged in deep interpretive study and activity whereby he reframed many traditional Orthodox theological constructs. For example, he redesigned theological constructs that would negate violence, especially towards Jews. He recognized and responded to various racial, religious, and ethnic inequalities, and became a close personal friend of Martin Luther King Sr. and Martin Luther King Jr. Finally, he supported and embraced their philosophies of non-violent resistance.”

A fuller piece on Archbishop Joseph Raya –an Apostle of Peace and Love— can be read here. Much more has to be researched and written on Raya and his work as a Melkite Catholic.