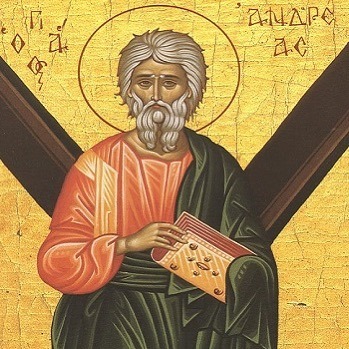 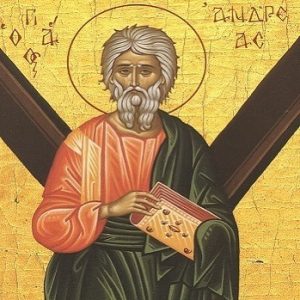 The feast of St. Andrew is the beginning of a new relationship of God with his people. He is the first-called, the first follower of Christ particularly as Rabbi, as Messiah and Savior. What does it mean to be Christian? It means to follow Christ without hesitation and without selfishness. This feast is truly a reflection of Christmas. Jesus is the first-born of the Father, the first-born of all creation, the new Adam, the re-Creator of the human race. Andrew is the first-called, but he is simply the forerunner of all who choose Christ, in a world that is hostile to Christ and his renewal.

On this feast, we also begin the singing of Christmas stichera. At Psalm 140 of Vespers, we see that Bethlehem is filled with the fire of the Godhead, “Isaiah, dance for joy: receive the word of God. Prophesy to the Virgin Mary that the bush burning with fire will not be consumed by the radiance of our God.” At the Apostichera, we question the righteous Joseph, “Tell us, O Joseph: How is it that you bring the Maiden which you received from the Temple to Bethlehem pregnant?” Through divine intervention, the sending of an angel, he sees through to the holiness of his wife. The stichera at Vespers tells us that the Light that never sets has come into the world in the town of Bethlehem, and is worshiped by the angels, the shepherds and the Magi, a theme to be repeated frequently in the Christmas feast.

For us to recognize Christ, we must follow the first-called Andrew, whose first question was, “‘Rabbi’ (which translated means Teacher), “where are you staying?” [Jesus] said to them, “Come, and you will see.” This is Christ who was to say later, ““Foxes have dens and birds of the sky have nests, but the Son of Man has nowhere to rest his head. (Luke 9:58)” We have no comfortable place in this world. On Christmas, we “come and see” the Word of God in poverty, in a cave, rejected and persecuted by the world.