The Holy Apostle and Evangelist Matthew 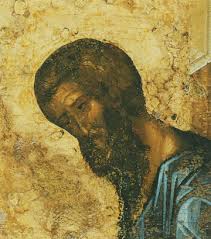 At the beginning of the Fast before Christmas, we celebrate the feast of St. Matthew, who wrote one of the Gospels of the birth of our Lord. (St. Luke is the other.) St. Matthew’s purpose was to show how the prophecies of the Covenant were fulfilled in Jesus. Therefore, he is the son of Abraham and the Son of David. He fulfills the prophecy of Isaiah that a virgin would give birth, the prophecy of Micah that he would be born in Bethlehem, the prophecy of Jeremiah that the innocents would die, and that he would be called a Nazorean. Matthew tells us of the visit of the Magi, the massacre of the innocents, and the flight into Egypt.

It is also Matthew who presents to us the model figure of St. Joseph. Just as the Joseph of the Old Testament saved his people in Egypt, so the Joseph of the New Testament saves the hope of the people, Jesus, by taking him to Egypt. We have no better model of human fatherhood. Joseph is a righteous man (Matthew 1:19), who is open to God’s revelation through his messenger angel that the child of Mary is of God, a faith that goes beyond human knowledge. It is Joseph who protects the child, his foster son, so that Jesus, the Savior, could someday fulfill the plan of the heavenly Father. It is Joseph who re-orders his whole life for the sake of his beloved child. Joseph, then, is a model of divine fatherhood, “from whom every fatherhood in heaven and on earth is named. (Ephesians 3:15)”

In Christmas, we must be filled with the righteous of the holy Joseph.

Troparion at Glory …, Ode 3 of the Feast of St. Matthew:

Matthew, the divinely-minded trumpet made the teachings about God resound. He has poured out the radiant life of the Trinity upon the peoples as he revealed to them the Incarnation of the Word in you, O pure Virgin.