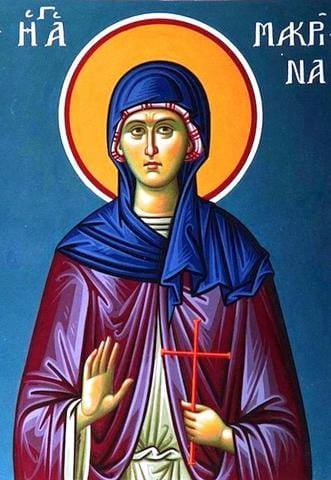 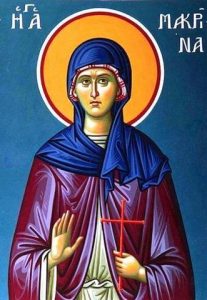 Macrina was born into a wealthy aristocratic family to parents Sts. Basil and Emmelia, as the oldest of ten children. She was named after her grandmother, St. Macrina the Elder, who was martyred for the faith. When her father died, St. Macrina became the head of the household, providing financial support for the family and managing the family’s estate. She was instrumental in the raising of her nine siblings, providing them both social and spiritual direction. St. Macrina encouraged her mother to give up the domestic life, and devoted the family’s estate to the founding of a monastery. Here there arose a vision of Christian life that included a self-sustaining community, in service to the poor, sharing everything in common.

Macrina was ordained a deaconess, encouraged her family into monasticism, and founded a double monastery, which included both a men’s and a women’s section. She appointed her youngest brother, St. Peter to be the abbot of the men’s section, though she was the spiritual leader and head of the entire community. She had some trouble convincing the eldest of her brothers, Basil, to take up the religious life. After going off to study at the most prestigious university in the area, he returned full of pride and pomp, having been exalted as the most intelligent and well-spoken student, and having been offered the highest positions of rank. However, according to her younger brother Gregory, once Basil spoke with Macrina, she out-philosophized him and he was convinced to take up the religious life. Basil went on to be appointed a Bishop, and is now remembered as St. Basil the Great, author of the Liturgy of St. Basil, and one of the most beloved and revered holy men. All of Eastern monasticism today follows the monastic guidelines that St. Basil recorded, which are in all likelihood the rules he learned from his elder sister Macrina.

According to her brother Gregory, who is now remembered as St. Gregory of Nyssa, St. Macrina was the spiritual center of the family, and in all his writings, she is referred to as ‘The Teacher.’ She was renowned for her holiness, her preaching ability, her many miracles, and her strong spiritual direction. More than anyone else, except perhaps the Apostle Paul, Mother Macrina has forever shaped the nature of Christianity, and in particular, the Orthodox practice. She is the true spiritual mother to us all.

(Thanks to In Communion)

Could we hope that the next parish in our Melkite Eparchy in the USA named in honor of St Macrina.