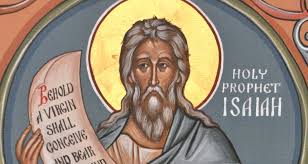 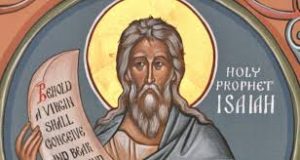 We commemorate liturgically today the Holy Prophet Isaiah who lived 700 years before the birth of Jesus. Isaiah had a royal lineage and is revered as a martyr. The Jewish king Manasseh ordered that he cut in half by a wood-saw. Isaiah was buried near the Pool of Siloam but his bones were moved to Constantinople in the church of Saint Laurence at Blachernae. Part of the head of the Prophet Isaiah is preserved at Athos in the Hilandar monastery. The importance of being buried near the Pool of Siloam comes from a miracle he performed through God’s power to quench the thirst of those defending Jerusalem from her enemies. Siloam means i.e. “sent from God.” The holy prophet is known to be wonderworking. Genealogy shows us that Isaiah’s father Amos, raised him in the fear of God and in the law of the Lord.

In addition to the virtue of life of Isaiah, he important because he is clear in his prophesies about the coming of the Messiah, Jesus, Christ the Savior. The prophet names the Messiah as God and Man, teacher of all the nations, founder of the Kingdom of peace and love.

In the Kondakion the Church sings,

You were favored with the gift of prophecy, O martyr and seer, Isaiah, preacher of the things of God, and you announced the Incarnation to all when you proclaimed: Behold, a virgin will be with child.

By Isaiah’s prayers, may our souls be saved.