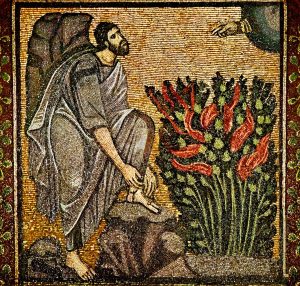 Today, the Church honors the memory of the Holy Great Prophet Moses, called the God-Seer and lawgiver, and born into the tribe of Levi. Scholars say he flourished 14th–13th century BCE. As we know, under Moses’ leadership the Hebrew people were lead to their freedom from the Egyptian oppressors in what is called the Exodus, meeting with God (see the image with this post) AND received the revelation from God that became the Pentateuch (the first five books of the Bible).

Moses is also listed in the Roman Martyrology. The entry for Moses reads:

The Troparion for the feast today reads:

O prophet Moses, you reached the summit of virtues. By this you came to see the glory of God. You received the tablets of the grace-giving Law and became the crown of prophets and a mystery of piety; for you carried grace deep within you.

On Mt. Horeb the great prophet Moses saw God in the bush that burned without being consumed, and God revealed his Name to him, “I am who I am.” (Exodus 3:14) It is this Name of God that we invoke in the Anaphora of St. Basil the Great, “O Eternal Being … “ On Mt. Sinai God revealed a portion of his glory to Moses when he gave him the ten commandments. On Mt. Tabor, Moses stood with Elijah to witness the glory of God revealed though Jesus.

Thus, today we honor this Great Prophet who has led us into the presence of God, who led his people into the land promised by God, who today leads us to an understanding of God, essential Being, the Creator of all that is, the Cause of all that is good and the Lover of each and every person, “In him we live and move and have our being. (Acts 17:28).”