Procession of the Cross 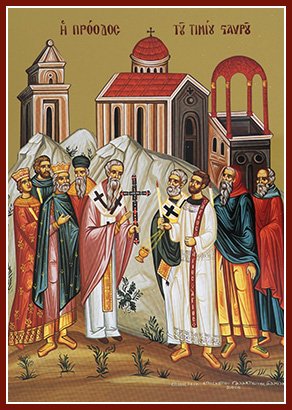 According to the Synaxarion, the feast celebrates the veneration of the Holy Cross in Constantinople. The early days of August were dangerous in antiquity. Because of the heat, many diseases became strong, and so the Cross was displayed in various places in the city for fourteen days. This feast was then introduced into Rus in the fifteenth century.

St. John calls the Cross the glory of Jesus, not because of its ugliness, but because it witnesses to the infinite love of God for his people. Because of love the cross is a “trophy of victory.”

In the Ambon Prayer of the Feast of the Exaltation, we pray, “You are glorified by the exaltation of your venerable Cross and by it accomplish our purification from the pride of demons.” As the people of Constantinople centuries ago looked to the Cross for deliverance from illness, we look at it today as our hope for deliverance from sin and evil.