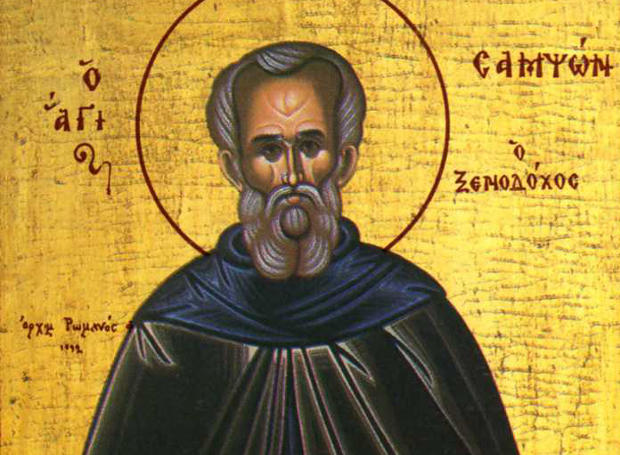 Today we are given as a model of holiness and witness to the Gospel of Jesus Christ the venerable father, Samson, called the hospitable, priest and physician. Samson is numbered among a few who are ordained priests and physicians, so we ought to make it a point to ask for his intercession as we all face medical concerns personally or with family and friends.

The Church teaches us the place St Samson has among the great Cloud of Witnesses in the Troparion for the Divine Liturgy. We have a clear expectation for our own Christian life in seeing St Samson extolled:

“Patience reaped you your reward, O holy father, for you persevered in constant prayer and devotion. In your great love for the poor and the afflicted, you attended to their needs of body and soul. So now we entreat you in our need, O holy father, Samson, beg Christ, our God, so save our souls.”

Samson is known for his patience, perseverance in troubled times, constant prayer and devotion, care for the poor and weakened of body and soul. Here we see what Christ wants for us and how He (the Lord) wants us to reflect to the world. These virtues of life will lead us to our union with Christ in heaven.

His biographers speak of St. Samson this way:

Samson was born to a patrician family in Rome in the sixth century, when the city had fallen on hard times. He was a physician, and inspired by his faith in the healing Christ, he devoted all his time, wealth, and skill to others. He turned his estate into a clinic to treat the poor. After he trained a staff to care for the large numbers coming to seek both medical and spiritual attention, Samson left, as a virtual beggar, to make a pilgrimage to Constantinople. His reputation soon followed him, and once again he was busy fighting disease and despair. He was so respected that he was summoned to treat the emperor Justinian. In gratitude for both his medical and spiritual counsel, Justinian endowed him with funds to establish a medical clinic much larger than the one he had left in Rome. Samson worked until his death on this day in 598. (NS)