Day of Prayer for the Protection of the Environment 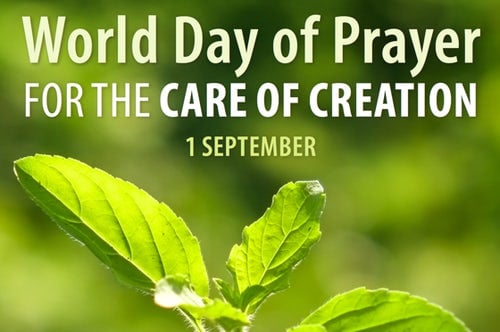 In 1989, the Ecumenical Patriarch Demetrius instituted a Day of Prayer for the Protection of the Environment, establishing it on September 1.

Pope Francis has extended that remembrance to the Catholic Church. In 2016, the Ecumenical Patriarch Bartholomew said, “Following for many years the catastrophic world developments in environmental matters, the Holy and Great Mother Church of Christ, on its own initiative set the start of every ecclesiastical year as a day dedicated to Creation, to the environment, calling during this day upon the whole Orthodox and Christian world to raise a prayer and supplication to the Creator of all, to give thanks for the great gift of Creation, make supplications for the protection and safeguarding from every visible and invisible attack by man. Therefore also this year during the aforementioned day, from the Ecumenical Patriarchy we recall the need to make EVERYONE aware of the ecological problems faced by our planet.”

The environmental issue has become a polarizing political issue, but since the leaders of the Catholic and Orthodox Churches and all the nations of the world (except the United States) have called for measures to protect the environment, all faithful should pray, at least, that we act to protect clean air and water, so as not “to make America stink again.”

Pope Francis wrote, “These include the awareness that each creature reflects something of God and has a message to convey to us, and the security that Christ has taken unto himself this material world and now, risen, is intimately present to each being, surrounding it with his affection and penetrating it with his light.” (Laudato Si 221)

The Orthodox Church has a liturgical office for this day:

“Lover of Mankind, keep unharmed the environment that clothes the earth, through which, by your will, we who inhabit the earth live and move and have our being, so that we, your unworthy suppliants, may be delivered from destruction and ruin,” (Stichera at Psalm 140)