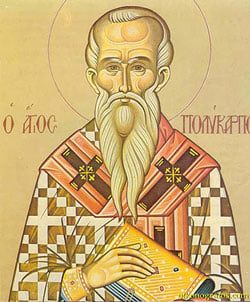 Today, we liturgically recall the memory of the Holy Martyr Polycarp, Bishop of Smyrna.

The Holy Martyr Polycarp was one of the most beloved saints of the early Church. He was, by tradition, a disciple of St. John the Theologian, and lived from 69-155. After serving the Gospel for his whole life, as an old man, he was brought before the pagan authorities and judged. The account of his interrogation: The proconsul asked him if he were truly Polycarp. When he said he was, the proconsul tried to dissuade him. “Have respect for your age. Swear by Caesar. Denounce Christianity. Curse Christ and I will release you.”

Polycarp replied, “I have served him for eighty-six years and he has done me no wrong. How can I blaspheme my king and saviour?”

The proconsul continued to plead with Polycarp, who answered, “Listen, I am a Christian. If you are willing to learn our doctrine, give me a day to teach you.”

The proconsul said, “Persuade the people.”

“I think you would be a worthy student. Christianity teaches respect for civil authorities. But I will not attempt to defend myself against this unruly mob.”

“I have wild animals! If you do not repent, I will throw you to them.”

“Send for them. We are not permitted to repent from better to worse.”

“If you are not afraid of the beasts, I will have you burned.”

“You threaten me with fire that burns for a little while. You don’t know about the fire of judgement that is to come. Don’t wait. Do what you will.”

In the Byzantine Church, he was so important that his commemoration was kept on the Second Sunday of the Great Fast. All of us Christians are asked to give this same witness: by a life lived in Christ and in his gospel, and by a death united with him in his cross that we may receive his resurrection.

“But Polycarp also was not only instructed by apostles, and conversed with many who had seen Christ, but was also, by apostles in Asia, appointed bishop of the Church in Smyrna, whom I also saw in my early youth, for he tarried [on earth] a very long time, and, when a very old man, gloriously and most nobly suffering martyrdom, departed this life, having always taught the things which he had learned from the apostles, and which the Church has handed down, and which alone are true.”
– St. Irenaeus, Against Heresies (Book III, Chapter 3)

“Accordingly, we afterwards took up his bones, as being more precious than the most exquisite jewels, and more purified than gold, and deposited them in a fitting place, whither, being gathered together, as opportunity is allowed us, with joy and rejoicing, the Lord shall grant us to celebrate the anniversary of his martyrdom, both in memory of those who have already finished their course, and for the exercising and preparation of those yet to walk in their steps.”
– The Martyrdom of Polycarp