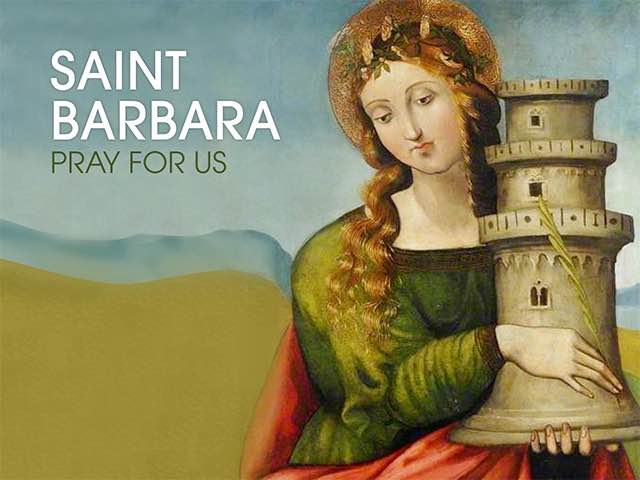 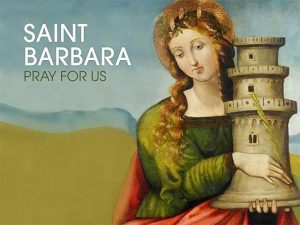 The Church liturgically recalls the memory of St Barbara a 3rd century martyr-saint, born in Nicomedia in what is now modern day Turkey.

The Troparion for the Liturgy reads,

Today, let us honor the great and holy Barbara, murdered by her own father for her loyalty to Christ. In spite of all, by the power of the holy cross she prevented the victory of her foes, so that she won the freedom to join her Lord.

“According to tradition, after the death of her mother she was raised by her rich and tyrannical pagan father who, because of her beauty and intelligence, guarded her closely, keeping her locked away in a tower to protect her from the outside world. She was educated by tutors and came to reject the false gods she was taught to worship in favor of the true God for whom she yearned and wished to discover, dedicating her life and virginity to this purpose. She developed a prayer life and resisted her father’s attempts to have her marry. Believing Barbara to be negatively affected by the seclusion, her father allowed her more freedom to associate with the world. She soon discovered Christians, and, recognizing the Creator she sought, and was baptized in secret. After informing her father that she was a Christian, he denounced her to the authorities under the persecution of Roman Emperor Maximian. She was imprisoned and cruelly tortured, but remained steadfast in her faith. During the night she would pray fervently, and her wounds would miraculously heal. This only subjected her to greater torments, followed by more miraculous interventions. She was finally beheaded by her own father, and afterward he was struck and killed by lightening as punishment.

“St. Barbara is the patron saint of firemen, armorers, artillerymen, military engineers, miners, and others who work with explosives. She is also the patron against storms, lightning, and fire, to name a few.