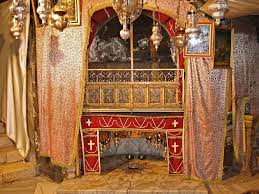 Today we begin a 40 day journey to the adore Our Savior in the Bethlehem cave. However, some Melkites will take up the option of beginning the Nativity Fast on December 10.

The Church always presents us with the fullness of the Tradition, and exhorts us to conform our lives to it, to the best of our ability. “Do what you think you can do–and then a little bit more. Next year, do more, again”.

A 40-day fast before the Nativity heightens (or should heighten) people’s awareness of the importance of the Incarnation.

To help us enter into this time of preparation, here is an excerpt from Fr. Thomas Hopko’s excellent book, ‘Winter Pascha’:

The Christmas-Epiphany season in the Orthodox Church begins with a forty-day fasting period….When winter begins to make its way into the northern hemisphere, the Church of Christ begins to celebrate the feast of Christ’s Nativity…called [Winter] Pascha. This emphasizes its close connection with the mystery of our salvation and deliverance from sin and death; the mystery which the holy Church proclaims in her dogmatic teachings and with which she brings us into direct spiritual contact in her liturgical services and sacraments.

The liturgical services for Christmas, officially called The Nativity According to the Flesh of Our Lord and God and Savior Jesus Christ, are consciously patterned after the services for the festival of the Pascha of the Lord, the holy Resurrection. There are pre-feast preparations. There are the special royal hours with their prophecies, epistles, gospels, and hymns on the eve of the feast, followed by the vesperal liturgy of St Basil the Great. There is the solemn all-night vigil, crowned by the matin’s canon and hymns. And finally, after the eucharistic celebration of St John Chrysostom on the day of the feast itself, the celebration continues to its completion in the festival of The Meeting of the Lord in the Temple forty days later. At the center of the festal season remains the original “Festival of Lights,” the holy Epiphany, officially called in the Orthodox Church The Holy Theophany of Our Lord and God and Savior Jesus Christ.
The liturgical verses and hymns for Christmas and Epiphany, the Pascha of Christ’s incarnation and manifestation in the flesh, repeat those of Easter, the Pascha of Christ’s death and resurrection. The Lord’s birth and baptism are directly connected to His dying and rising. He was born in order to die. He was baptized in order to be raised. The con-holy Epiphany, officially called in the Orthodox Church. The harmony between the events is overwhelming. The beauty of it is almost more than the believer can bear.

Today He who hung the earth upon the waters
is hung upon the tree.
Today He who holds the whole creation in His hand
is born of a virgin.
The King of angels is decked with a crown of thorns.
He whose essence none can touch is bound
in swaddling-clothes as a mortal man.
He who wraps the heavens in a cloud
is wrapped in the purple of mockery.
God who in the beginning fashioned the heavens
lies in a manger.
He who freed Adam in the Jordan
is slapped in the face.
He who rained manna on His people in the wilderness
is fed on milk from His mother’s breast.
The Bridegroom of the Church is affixed
to the cross with nails.
The Bridegroom of the Church summons the wise men.
The Son of the Virgin is pierced with a spear.
The Son the Virgin accepts their gifts.

This is what Christians celebrate each year in what Father Alexander Schmemann was the first to call “the Winter Pascha.”