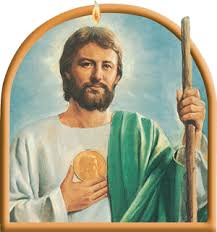 The holy apostle Jude, relative of the Lord is honored by the Byzantine Church today. In addition to being an apostle he is in-charge of difficult cases. He is frequently invoked by medical professionals and those who are living with illness. Certainly we know Danny Thomas’ famous work in establishing a hospital for children under the patronage of St. Jude.

Our parish is the location of a shrine dedicated to the holy apostle Jude, one that draws many people to make supplication for the Saint’s intercession with the Lord. More about the Saint and the shrine can be found  here.

“Like many of the other apostles, Jude’s name has several variations. In the Gospels he is called Judas; Luke adds, “son of James,” and John says parenthetically, “not the Iscariot.” Matthew and Mark call him Thaddeus, no doubt because of the odium associated with the name Judas. Jude, as we know him, was one of the Twelve, and a relative of Christ through James.

Aside from mention of Jude in the Gospels and his own letter which is part of the New Testament Canon, there is nothing known of his life or manner of death. [In many ways he is a mystery.]

The Epistle of Jude is addressed to all Christians. His work was a contribution to the complex struggle of the infant Church against heresy. Jude’s letter is witness to the Church’s steadfast confirmation of Apostolic Tradition and law.” (NS)