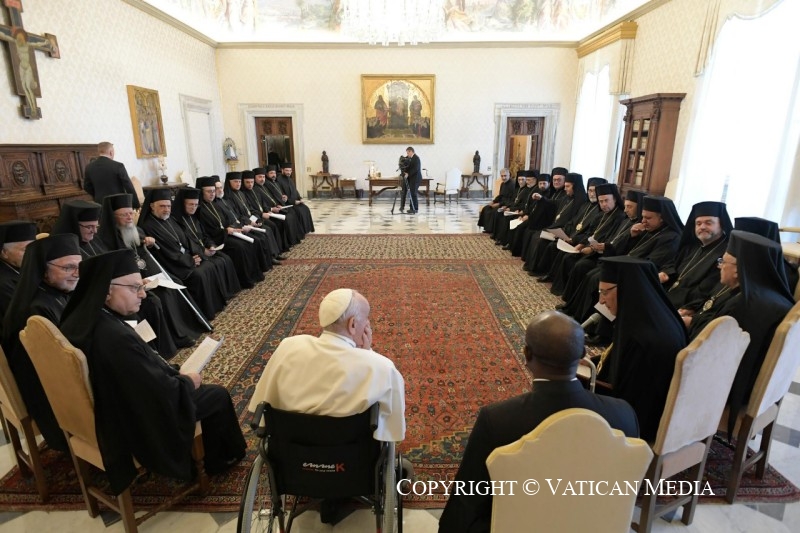 This week the Melkite bishops are meeting in synod in Rome. Today, the Holy Father met with the Melkite bishops and gave the following address. There are two surprising points in the address which are highlighted below. Our own Bishop Nicholas is present at the synod. Among the many things synod will consider at this meeting is the election of a new bishop for our Eparchy of Newton.

Your Beatitude,
Dear Brothers in the Episcopate!

I am pleased to welcome you this morning, starting the work of the Synod of Bishops of the Patriarchal Church of Antioch of the Greek-Melkites. I thank the Patriarch, a great friend, His Beatitude Youssef Absi, for the words he addressed to me.

You have asked to be able to celebrate your annual convocation in Rome, at the tombs of the holy Apostles Peter and Paul, and to those of many martyrs who gave their lives out of fidelity to the Lord Jesus. We need their intercession, because even in our time, in a society that some analyzes define as “liquid”, with light ties that multiply loneliness and the abandonment of the most fragile, the Christian community should have the courage to bear witness to the name of Christ, author and perfector of our faith. Among the Successors of Peter there are also some born in Syria, and this makes us feel on the one hand the Catholic breath of the Church of Rome, called to preside in charity and to have the sollicitudo Ecclesiarum omnium, and on the other hand it makes us go pilgrims, in the land where some of you, starting with Patriarch Youssef, are Bishops: the beloved and tormented Syria.

The tragedies of recent months, which sadly force us to turn our gaze to Eastern Europe, must not make us forget what has been going on in your land for twelve years. I remember, the first year of my pontificate, when a bombing raid on Syria was prepared, that we called a night of prayer here, in St. Peter’s, so too, there was the Blessed Sacrament and the full square, who prayed. There were also Muslims, who had brought their carpet and prayed with us. And there was born that expression: “Beloved and tormented Syria.” Thousands of dead and wounded, millions of internal and foreign refugees, the impossibility of starting the necessary reconstruction. On more than one occasion I happened to meet and hear the story of some young Syrian who came here, and I was struck by the drama that he carried within himself, for what he lived and seen, but also his gaze, almost drained of hope, unable to dream of a future for his land. We cannot allow even the last spark of hope to be removed from the eyes and hearts of young people and families! And I therefore renew my appeal to all those who have responsibility, both within the country and in the international community, so that an equitable and just solution to the Syria tragedy can be reached.

You, Bishops of the Greek-Melkite Church, are called to question yourselves on the way in which, as a Church, you bear your witness: heroic yes, generous, but always in need of being placed in the light of God so that it may be purified and renewed. Ecclesia semper reformanda. You are a Synod, for those characteristics that have been recognized as a Patriarchal Church, and it is necessary that you ask yourselves about the synodal style of your being and acting, according to what I have asked the Universal Church: your ability to live the communion of prayer and of intentions between you and with the Patriarch, between Bishops and presbyters and deacons, with men and women religious, and with the lay faithful, all together forming the holy People of God.

You are rightly concerned about the survival of Christians in the Middle East —me too: it is a concern! —, a request that I fully agree with; and on the other hand, for decades now the presence of the Melkite Church has had a global dimension. The patriarch asked me to ordain bishops from many places: there are eparchies for Australia and Oceania, in the United States and Canada, in Venezuela and Argentina, just to name a few; and there are many faithful also in Europe, although they have not yet had the possibility of being gathered in their own ecclesiastical circumscriptions. This aspect undoubtedly represents a challenge, ecclesial but also cultural and social, not without difficulties and obstacles. At the same time it is also a great opportunity: to remain rooted in one’s traditions and origins, while opening yourselves to listening to the times and places where you are scattered, to respond to what the Lord is asking of your Church today.

Within the Synod, I encourage you to exercise your competences with great wisdom: I know that reflections have begun in some Eastern Churches about the role and presence of Bishops emeritus, especially those over eighty years old, who in some Synods are a consistent number. Another chapter is that of the elections of bishops, for which I ask you to always reflect well and pray to the Holy Spirit to enlighten you, preparing adequately and well-in-advance the material and information on the various candidates, overcoming any logic of partisanship and balance between religious orders of origin. I urge you – and I thank you for the commitment you will put into this —to make the face of the Church shine, which Christ acquired with his Blood, keeping away divisions and murmuring, which do nothing but scandalize the little ones and disperse the flock entrusted to you. On this I stop: beware of chatter. Please, nothing. If one has something to say to the other, say it to the face, with charity, but to the face. As men. He can say it in the face alone, he can say it in the face in front of others: fraternal correction. But never speak badly of the other with another, this is not done. This is a worm that destroys the Church. We are brave. Let’s look at how Paul said many things to James’ face. Also to Peter. And then there is unity, true unity, between men. Shut up all sorts of chatter, please. And then the people are scandalized: look at the priests, look at the bishops, they peel among themselves! I recommend: what you have to tell yourself, to your face, always.

I cordially bless each of you and your synodal work. May the Holy Virgin, Mother of the Church, accompany you. And I ask you for the charity to pray for me. I need it. Thank you!