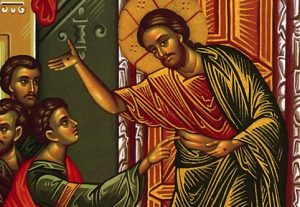 The Eastern Catholic tradition illuminates our heart and mind through a deep personal love for Jesus Christ. Encountering Jesus as Lord and Savior emphasizes a number of beliefs the spiritual life. These include:

The central emphasis of Eastern Catholic spirituality is on the important belief is that we are called “to become partakers of the divine nature” (2 Peter 1:4), not merely to be ‘saved’ from sin. We truly do become filled with the Holy and Gracious Life of the Triune God at Baptism/Chrismation, and do become true man or woman of God.

Our participation in the divine nature is called theosis — “divinization” or “deification.” We believe that Theosis is the mystery where Jesus makes His divinity our own. It is seen as a movement toward communion with the divine. Speaking of the Orthodox but it is true of us, too, Father Thomas Fitzgerald said:

“The fundamental vocation and goal of each and every person is to share in the life of God. We have been created by God to live in fellowship with Him. The descent of God in the Person of Jesus Christ has made possible the human ascent to the Father through the work of the Holy Spirit. Orthodoxy [and Catholicism] believes that each Christian is involved in a movement toward God which is known as theosis or deification.”

We are invited, therefore, from the moment of our Chrismation to live the very life of God, to be intimately related to God, to be united to Christ, to be in love with the Lord, and to have the Holy Spirit dwell within us! The Catechism of the Catholic Church teaches,

The Word became flesh to make us “partakers of the divine nature”: “For this is why the Word became man, and the Son of God became the Son of man: so that man, by entering into communion with the Word and thus receiving divine sonship, might become a son of God.” “For the Son of God became man so that we might become God.” “The only-begotten Son of God, wanting to make us sharers in his divinity, assumed our nature, so that he, made man, might make men gods” (460).

For purposes here, St. Athanasius, one of the Church Fathers, understood the reason for Jesus’ Incarnation (that is, God becoming man): “God became man so that man might become God.”

Our reception of the Holy Mysteries (the sacraments)

The Holy Eucharist is received by the faithful, child and adult alike. We do so as an act of faith, hope and charity. The Eucharist is often called the medicine of immortality, a sacrament of healing. The Apostle Paul teaches us that we are to receive the Body and Blood of Christ worthily, that is, without sin on our soul otherwise it is understood to be a sacrilege. St. Ambrose of Optina said, “After communion you should ask the Lord that you preserve the Gift worthily and that the Lord help you so that you do not turn backward, i.e., to your former sins.”